Ragwort gets a lot of bad publicity, and a lot of time and expense is dedicated to its control. There is no doubt that it can pose a threat to livestock if it is incorporated into hay as the wilting process makes some nasty alkaloids available in livestock feed, but there is also a positive side to Ragwort that garners fewer news reports. Many people have seen the yellow and black striped caterpillars of the Cinnabar moth feeding on Ragwort, but how many have seen the Ragwort Fly Sphenella marginata? It is one of the tephritid flies, a type of picture-winged fly, and its larvae form galls on Ragwort. Other species of tephritid fly have been seen regularly on thistle in the quarry and other areas of the Country Park, but this is the first time the Ragwort Fly has been found here. It is heartening to think that the ever-present Ragwort is helping to increase biodiversity in the Country Park. 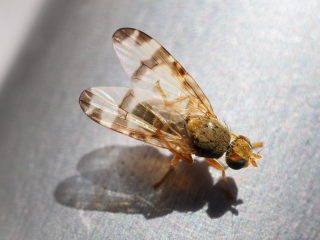