Today we re-opened a number of footpaths in Ecclesbourne Glen that have been closed due to landslips since the end of last year after having then only been open for about a month. This time we hope it will last a little longer. This was the culmination of many days work repairing culverts and steps, putting in a complete set of new steps, cutting back encroaching scrub and removing overhanging branches.

The coastal path from the East Hill to the bottom of Ecclesbourne Glen will remain closed indefinitely as it has been decided that the ground is too unstable to re-open it safely. This is shown on the map below in red and the re-opened paths in blue. The path shown in orange is also currently closed due to a collapsed culvert but will be open again once East Sussex County Council Rights of Way have replaced this with a footbridge as this is their responsibility. 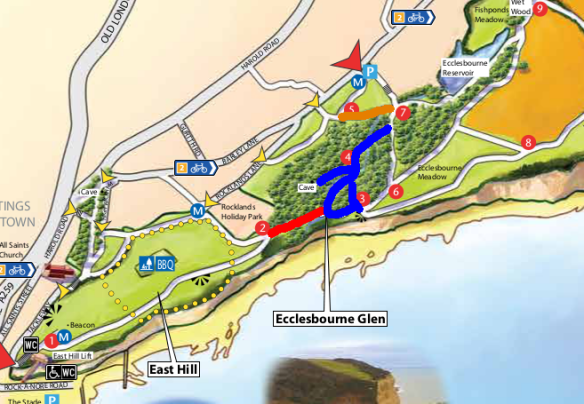